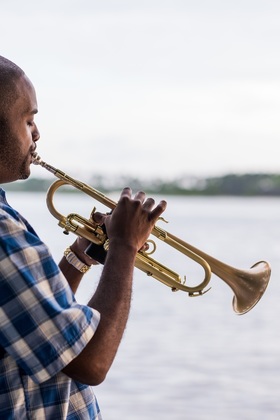 At first glance, Dr. Brian Taylor’s daily life sounds like something out of a comic book. By day, he is a mild-mannered scientist at UNC Chapel Hill. However, when he leaves work in the evening, Dr. Taylor is an active and emerging trumpeter, flugelhornist, composer, and arranger. While his primary musical focus is jazz, Dr. Taylor enjoys and draws on many styles and genres to bring his imagination to life, ranging from Debussy to Ellington, and bebop to R&B. As a high school student, Dr. Taylor studied trumpet with New York educator Dr. Peter Archer, and began his journey into jazz at the Center for Preparatory Studies in Music at Queens College. During his undergraduate and graduate years at Case Western Reserve University (CWRU), Dr. Taylor played and studied under the tutelage of trombonist/composer/arranger Paul Ferguson, one of the leading musicians of his generation. While in school, from his undergraduate start in 2001 to his PhD defense in 2012, in addition to playing in CWRU's jazz ensembles, he managed to compose or arrange several charts for the group to play every year.

Dr. Taylor has had the fortune to play with a variety of artists including the Paul Ferguson Jazz Orchestra, the Cleveland Jazz Orchestra, the Gary Wofsey Big Band, Phil Woods’ bassist and three time Grammy winner Steve Gilmore, the late David Shelander, and emerging pianist Gino Rosaria. In addition to playing, Dr. Taylor has served as a musician/transcriber for the Tesla Orchestra. In 2011, two of Dr. Taylor’s compositions were selected for the Greater Cleveland Flute Society’s annual “Composer’s Connection Concert”. Most recently, Dr. Taylor has contributed both original compositions and arrangements to Groove Symphony, and rising Conn-Selmer saxophonist and college friend Alyssa Hoffert’s La’Ventus saxophone quartet. Dr. Taylor is a triple alumnus of Case Western Reserve University, holding a B.S. in Aerospace Engineering with a Minor in Music (2005), and a M.S. (2009) and Ph.D. (2012) in Mechanical Engineering, where he studied Biologically Inspired Robotics.  When he is not playing or composing, Dr. Taylor is an Assistant Professor of Biology at The University of North Carolina at Chapel Hill.